The Warlocks - Songs From The Pale Eclipse

Veteran experimental psych-rock act the Warlocks’ current lineup is out of hiding, and putting all of their skeletons on display with the heart-numbing first single from upcoming LP Songs From The Pale Eclipse, due out 9/2 through Cleopatra Records. “Lonesome Bulldog” features muted vocals from bandleader Bobby Hecksher weaving wearily through static sonic terrain with the gusto of a jaded vagabond — which is a lot more pleasing than that description may sound.

Hecksher’s buried, half-vacant murmurings peek out from under the covers of distant, drowning percussion and jangling guitar interludes to reveal plenty of semi-disturbing accounts of purging angst: “Just another minute while I poke out my eyes,” “Nothing to eat, nothing to drink / No one to love, no one to talk to.” It’s all “just another day as a lonesome bulldog” for The Warlocks.

Listen to the single "Lonesome Bulldog" above and be sure to check out Songs From The Pale Eclipse on September 2. (Spin) 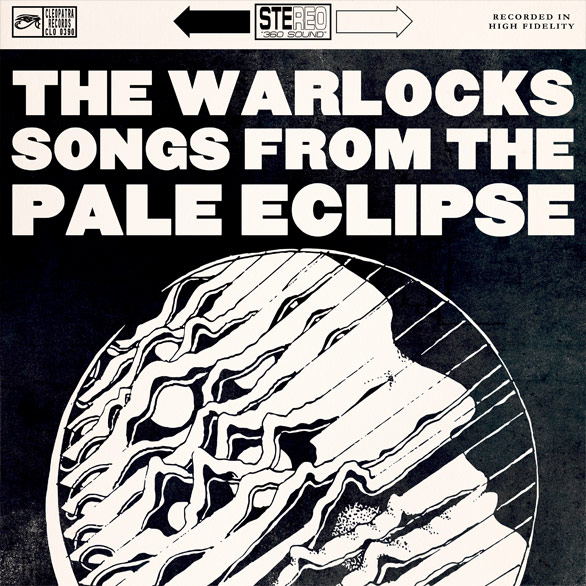 Formed in America during 1999, The Warlocks produce a relentless, hypnotic wall of sound that suggests a collision between classic psychedelia, Krautrock and Velvet Underground style rock and roll. It's just what the head doctor orders if you wish to be an underground stateside phenomenon and that's exactly what The Warlocks became.

Front man Bobby Hecksher grew up in the swamps of Tampa Bay, Florida where he was practically raised at a radio station owned his grandfather and where his mum also worked as a secretary. As a result Bobby was soon eating and breathing rock'n'roll on a daily basis. Bobby recalls, "My granddad was an inspiration. He created the radio station out of thin air. And from it all these nuggets of rock'n'roll came toward me".

At sixteen his family left the swamps and moved to LA where Bobby soon found kindred spirits. He jammed with Beck, playing bass on Stereopathetic Soulmanure, Beck’s second independently released album. He hung out in the decadent atmosphere of the Mad Hatter club and moonlighted in the Brian Jonestown Massacre whilst also attending parties with legendary acid guru Timothy Leary, a potent cultural and creative mix that led to the formation of The Warlocks.

Their debut album Rise & Fall (Bomp 2000) set out their template, allowing The Warlocks to build upon their reputation as a forceful live act. But it was the band's signing of a worldwide deal with Mute (in conjunction with City Rockers in the UK and with Birdman in America) that led to the release of Phoenix (2003) a record that raised their profile significantly. The album's varying moods and atmospheres range from the driving power of "Shake the Dope Out" to the 14-minute, hallucinogenic opus "Oh Shadie." International touring in support of the release and the sheer power of Warlock’s gigantic live sound built a worldwide cult following for the band that has only grown and intensified.

2005 saw Hecksher and company team up with veteran producer Tom Rothrock (Beck, Elbow, Motörhead) for the band’s third album, the dreamy blissed-out Surgery. After some significant changes in personnel, the band returned just 2 years later with the darker Heavy Deavy Skull Lover released on Tee Pee Records, followed by 2009’s The Mirror Explodes produced by Rod Cervera and Joey Santiago of The Pixies. All the while, the band continued to develop their sound and grow their fanbase, and after a somewhat longer hiatus, the Warlocks returned in 2013 with Skull Worship.

For The Warlock’s newest album, Hecksher has dug deep into the demo vault for the most promising, undiscovered musical treasures, which the band then reworked and re-recorded to bring you Songs From The Pale Eclipse. Hecksher explains, “Songs From The Pale Eclipse is a collection I’ve been wanting to get to for the last decade or so. We’ve sifted through stacks of demos, odds and ends on my 8-track…not everything fits like it’s one cohesive album; it’s not supposed to! In this modern age, you can pick and choose as you like!”

The first single from Songs From The Pale Eclipse, “Lonesome Bulldog,” features Hecksher’s solemn, yet seductive, raspy voice paired perfectly with melodic guitars that chime and swirl and sharp, tight drums. Hecksher’s poetic lyrics, such as “trying to unwind the time, falling through the mirror, with acid on my mind” from the track “We Took All The Acid” are playful yet articulate. “Drinking Song” is complete with visionary themes of the personification of alcohol and deep moods that reveal the pain of alcoholism, expressed by the line “oh alcohol, you know me too well.” The album’s deft production illuminates the multi-textured instrumentation and harmonically-rich vocals. All together, the effortless sounds of Songs From The Pale Eclipse will leave the listener intoxicated.

GET THE NEW ALBUM

Available for Download or on CD & Vinyl September 2nd!